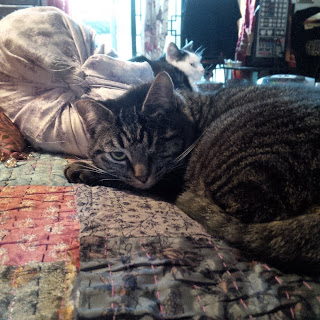 One eyed Lily was brought in to be euthanized due to needing her eye removal surgery. In addition, she has a chunk out of her ear; however, at only 5 months old, did not deserve a death sentence.
Thanks to Laurel & Elena at Kinder4rescue, Lily was saved and rehabilitated.
When she got here she did not understand how to completely trust love and affection; she was very fearful of the other cats but curious also.
I have showered her with love, and helped her to trust;
she is an incredible joy to spend time with; she likes to talk and play; she likes friends...and she can even sit on the same bed with feral Reese now. 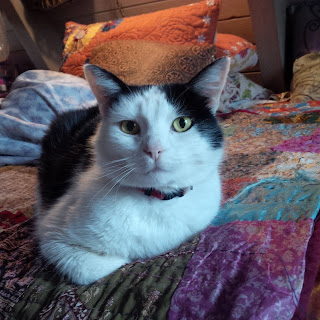 Reese, was a feral between 3 properties; he'd kept himself alive for a few years.
I spent a year gaining his trust during which time I saw him ravaged from fights, or infections, which he always overcame. He had such a sweet nature and responded deeply to the love and acceptance I provided him with, thus we bonded.
Every day, twice a day, he would be there waiting for me at the barn. When I had to move Hermes and they told me they were going to put poison out for the cat...I LOST it!
Luckily, my bond with Reese has allowed him to become an indoor cat, once of course: I caught him; he was here 3 weeks, got out, was gone for 2 weeks, and turned up back at the barn to be re-caught...NOT an easy task with a feral!

Reese is cool with the house, however, he wants "me" to himself, so we are still working on emotional security issues but you have no idea how rewarding it is to see these two even sitting on the bed near each other, much less joining Krishna & Vishnu at night when we all sleep together xo 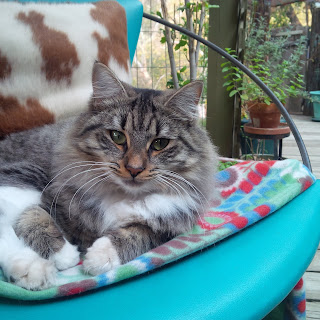 Kali...she's still on strike...she's gone from refusing to come in at night and be holed up with the lot...to now, finding a comfortable place in the clothes hamper where she can be immersed in my scent w/o other cats imposing on her...lol.

Our goal is to rescue & rehab; seek the perfect adoptive parents; and provide sanctuary for our permanent residents suffering from physical handicaps, PTSD, and chronic infections that prevents adoption. For our residents, we provide for their physical and emotional well being, along with their holistic care & medical needs. They in turn become contributors to our many projects at OrangeRay Creative Lab.

As a shaman and animal communicator, I am able to aid in their holistic care, and my consultation work is donated as well; as an artist, I provide: Web Design, Video Editing,"Healing Stones" jewelry designs: earrings & bracelets, plus "Energy Catcher" necklaces; Orgone Energy Diffuser/Accelerators; t-shirts, "Shaman Clips", "Earth, Sky, Water" Hemp Shopping bags, Hemp & Flax Beanies, "Gypsy Cuffs", Alchemy and Poetry books available for purchase, with all proceeds going to the animals at Pixie's Place!